Over the weekend my husband, our friend, and myself toured the Hill View Manor in New Castle, Pa. Before going, I watched the Ghost Adventures episode to get an idea of what we could possibly encounter. However, I never thought that we would experience what we did.

First, some back story… When the Hill View Manor opened in 1926 as The Lawrence County Home for the Aged, it operated as a poor farm. It was home to convicts just released from prison, unwed mothers, elderly, and the mentally disabled. One of the stories we were told while on the tour was about a man Eli Saurri who died in the original boiler room (We weren’t able to go into this section due to pipes that have fallen). They say that his friends found him drunk outside, and took him to the boiler room to sleep it off. Unfortunately, he died from potential alcohol poisoning and exposure.

Here is the entrance to the original boiler room 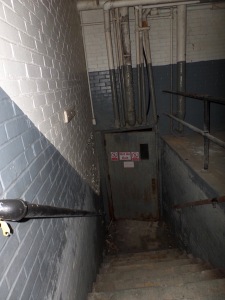 In the late 1960’s the building was renovated to become a nursing facility. One of the more notable deaths of this time was of a woman named Amanda. She was around 100 years old and blind. Staff put her room across from a hallway that led to the outside so that she could easily wheel herself out in her wheelchair to feed the birds. Our tour guide told us that there are actually two theories about how she died. One, she got confused (and made a few extra turns instead of going the straight route to her room) and ended up falling down the stairs to the basement. The second is that one of the other residents pushed her down the steps. They think this might have happened because there have been multiple EVPs (Electronic Voice Phenomena) captured on the stairwell saying “pushed” or “fall”.

Our tour began in the main entrance. We opted to take a 3 hour tour; 1.5 hour guided tour then 1.5 hours of us just roaming the facility ourselves. From the moment we walked through the doors, there was a different atmosphere to the place. Original documents and furniture transported us back to before 2004 when the facility closed. There was even still a calendar of events that hung on the wall.

While walking the first floor, our friend got a feeling coming from a specific room near the nurses station. When he asked the tour guide if something happened there, the guide looked shocked. He was getting ready to tell us about this room; it belonged to Amanda. There was definitely some kind of connection between Amanda and our friend.

From the first floor, we went down into the basement. Our guide admitted that he didn’t like going down into the basement alone, and I’ll admit there was a different feeling down there than in the rest of the building. It had a heavy darkness to it that kept you on edge. Once there, the guide took us through the “Belongings Room” where they store things that the residents left behind. 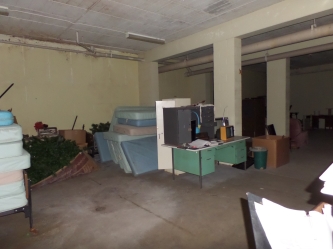 This was the only section of the basement that any of us felt comfortable in.

Next, we went to the boiler room (not the one where Eli Saurri died). There is said to be a spirit of a man named George who inhabits this space. As the tour guide stood in the pitch black, he jumped and grabbed at his arm; he said that he felt someone touch him. Entranced, I hung on the stories that he told until I noticed a dark shadow behind him move from behind one of the machines. I stayed quiet, not wanting to draw attention to myself or whatever the figure could be. Not wanting to be left behind in the basement as the others walked away I vowed to go back once the guided tour was over to get pictures. (More on that later in this post)

We followed on for the next hour, listening about the history and taking note of the newer parts of the building as well as the ones that were falling apart. The Hill View Manor does offer Paranormal Investigations so things are moved around or set out to be used as trigger objects. I don’t think the 3 of us would ever try to use anything like that to contact the other side.

The guide left us on the 3rd floor, and we began to explore alone. Nothing happened while we were exploring this area.

We made our way back down to the 2nd floor. There was a section that the tour guide told us not many people go to because of what happened there. He said that a woman who lived at the poor farm with her son had been raped in the back room. We went down this corridor, and again you could feel an uneasiness surround you.

Another place we spent extra time is what’s called “Angelo’s hallway”. While looking through the rooms, we heard a few unexplained bangs and as I walked into the main corridor I heard a note from the piano two rooms over in the kitchen/cafeteria.

While walking through the many corridors, the guide suggested that if we take a picture of a hallway to do it over our shoulder. Many people have caught figures while doing this. I followed his suggestion a few times through the manor, and got this.  Feel free to comment if you see anything. 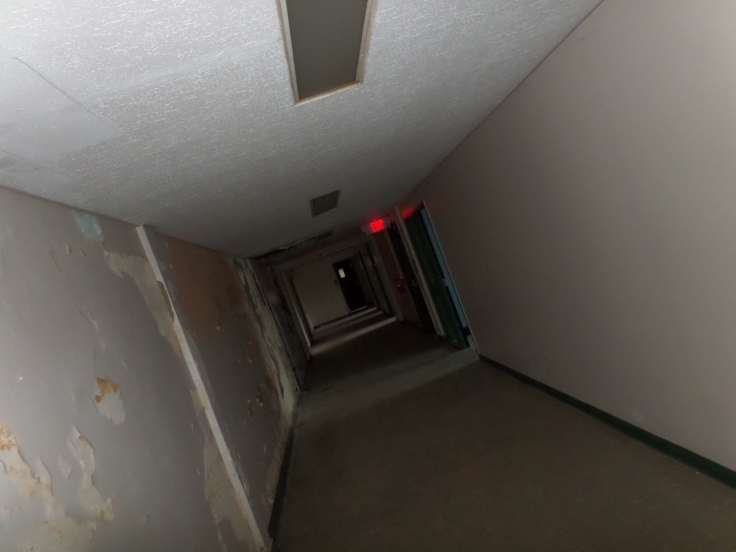 There was one other room on this floor where all three of us experienced unexplained smells. In this picture, I highlighted a few areas that could be orbs. There is a fine line between an orb and a dust particle, but due to the shape and the brightness I don’t think these are just dust. 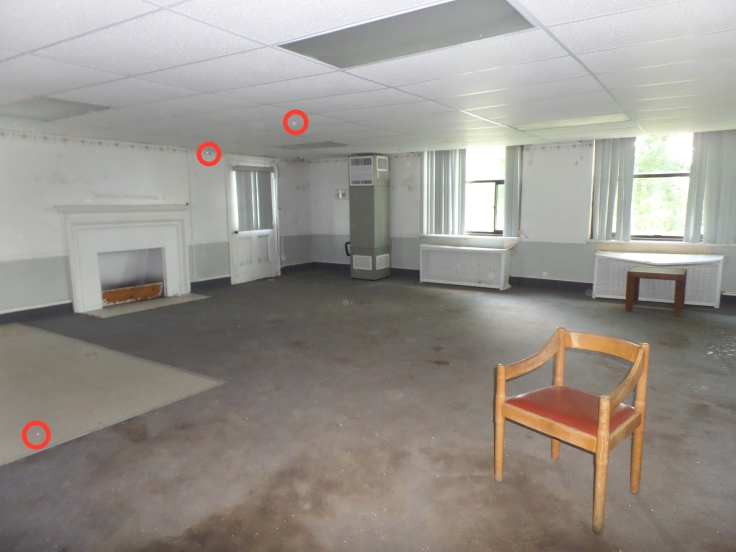 Outside of this room, something brushed against our friend’s hand.

Almost directly below this room is the Chapel on the first floor. The guide had said that people received EVPs if you read from one of the many hymn books that are out. I was sitting in the chairs facing the riser and took this picture. I’m not quite sure what the area highlighted is, but it was only in this one photo. I took the same shot multiple times.

Before leaving this area I began to look through the hymns. Almost instantly I felt a coldness (like when you stick your hand in a bucket of ice water) on my elbow and an energy wave wash over me; it felt like someone was holding on to my arm.

We finished the tour of the first floor, again stopping at Amanda’s room before moving back down to the basement for my pictures of the boiler room. I led the way down the steps, and for some reason could not bring myself to open the door; I had to have my husband open it. The feelings that I had the first time we went down there were intensified for no reason.

Turning on our cell phone flashlights, we hurried back into the “belongings room” where a calm once again fell over us. We took our time exploring the different suitcases, tables, papers..all of us interested in different things. I was looking in a cabinet when I heard a loud growl coming from the corner of the room. Frightened for the first time in the 3 hours, I suggested going to the boiler room then leaving.

All of us stopped in the doorway to the hall, frozen in place, looking into the darkness. I pulled my camera out to take a picture as the others noticed something dark move at the end of the hall. I hadn’t seen it since I was looking down, but I snapped a picture and went to step forward when I saw a dark figure crouching across from the boiler room entrance. Sheer fear washed over me, and I couldn’t get out of the basement fast enough. Words can’t describe what I felt or saw in that moment.

So much for a picture of the boiler room… but I did get this picture of the basement hall. (The creepy bunny was left by someone) The bright lights at the end of the hall are reflections of my camera flash. Again, if you see anything please feel free to comment.

In all, if you are looking for a place that has history and is known to be an active paranormal location the Hill View Manor is definitely a place worth seeing.